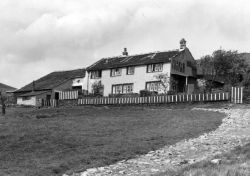 The first Marsden Youth Hostel was at Hopwood Farm; it opened in September 1932 as an 'adopted hostel' (i.e. not owned by the YHA) with a resident warden. Structural alterations and extensions were made in 1934, and in 1936 a local committee, independent of the YHA, built a common room for the use of YHA members at the hostel. According to a sign on the side of the hostel, it also served teas, presumably for walkers. The hostel closed in 1940 (or possibly 1939), re-opened in Whitsun 1943 under Mr and Mrs Shaw, and closed in 1944, with the warden Mr. Gibson due to move to Ellingstring YH, near Ripon. The War years were very hard for YHA with severe restrictions on travel and requisition of buildings restricting the organisation's ability to operate, and this may have been at least a contributory factor in the Hostel's demise.

The second YHA hostel was at Hades Farm, which opened in June 1969. The official opening was May 17th 1970, as the focus of a 'Pennine mini-marathon'. 40-plus people coming from Mankinholes (15 miles away) and Crowden (10 miles away) by foot or 'cyclo-cross' were expected to converge on the hostel for the ceremony at 4.30 p.m., followed by tea, soup, and hot dogs. The owner-Wardens were Mr Fred and Mrs Pamela Jones of neighbouring New Hey Farm, whose son Michael provided the services of a guide across the Moors 'for the uninitiated'. The hostel had electric light and cooking, geyser hot water, and 'a broad farmhouse hearth which warms and cheers beside a round-bellied, ancient iron cooking pot in the snug common room'. Farmhouse meals were provided for those who did not wish to cook. Despite the facts that between 600 and 1000 bed-nights were notched up in the first year, the hostel closed in 1972 at the end of the season.

The third Marsden Youth Hostel was at The Old Co-op, 1 Binn Road, the converted shop of the Marsden Equitable Industrial Society. It opened on 1st July 1975 after a long delay, with an official opening on 13th September 1975. It closed on 1st October 1983.