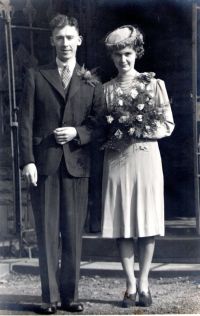 Hilton Wrigley built racing bicycle frames in Marsden during the 1950s and 60s.

Hilton worked for Brooks Motors as an engineering draughtman and his hobby, which took up most of his spare time, was building racing bicycle frames. His first workshop was on New Delight, next to the railway station, in Marsden. It is thought that at one time Hilton had a proper shop in addition, at Fall Bottom, near the steps which lead down from Manchester Road to Oliver Lane

Wrigley frames, of which there were four types, were all custom built by Hilton with the help of his unpaid assistant, Fred.

This article is based on Owen Wrigley's postings in our Forum.

I discovered Hilton Wrigley one day when l was out cycling from Morley to Bridlington and back. On the way home I caught up with another lone cyclist from Hudders?eld and we rode together chatting. I told him l was about to buy a quality bike and had more or less decided on a Rotrax. He told me about these superb frames called Hilton Wrigley and that Brian Haskell rode one. I had never heard of them, but this Huddersfield chap was so enthusiastic that I had to follow it up.

l was on National Service in the RAF at the time and so l wrote to Hilton Wrigley and he arranged to meet me at his workshop one Saturday morning; so l cycled over to Marsden with my brother to meet him. This would have been in early 1954.

I found him to be an unassuming and instantly likeable person and we got on well together immediately. As I remember it, his workshop was no more than a very large garden shed. He showed me a frame which he had just finished and was ready to go for painting. It was beautiful, an absolute work of art. I decided there and then that I wanted one. We discussed frame size, head and seat tube angles, lugwork style, lugs for cutaway brake and gear cables etc. and l confirmed my order on the spot. 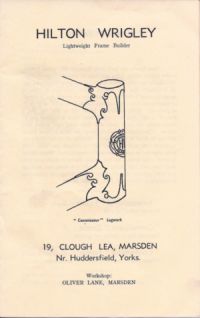 Mr. Wrigley told me that he didn't have the facilities to paint the frames, but part of the deal was that I could have any paint finish I wanted at any cycle factory in the country. I told him that I would probably go for Rotrax at Shirley, Southampton, and this didn't seem to faze him at all. In the event I went into Ellis Briggs at Shipley to try to find a colour scheme I liked because I knew they would have a large number of frames on show. They showed me about 20 frames in the upstairs room over the shop where I found just the colour I wanted, a rich ruby red polychromatic, and I made a note of it.

I wrote to Mr. Wrigley and told him I had found exactly the colour I wanted at Ellis Briggs so he might as well send it there to be painted. One web site says that he specified Ellis Briggs for all his paint jobs, but he hadn't done so in my case, so did I start the trend? The name Hilton Wrigley was to be on the down tube in white in Old English style writing. I specified that the ornate lugwork be picked out in gold, a white head tube, and an elongated white diamond down the seat tube. This was my brother's idea. Contrasting panels were normally wrapped round the seat tube, but he suggested the diamond design, and although I had never seen one I liked the sound of it. Pictures on the internet show blue and green frames in identical finishes to mine. Did I start the elongated diamond design? I'd be absolutely delighted if this were the case, although I could never prove it!

The frame arrived at my home just before Easter 1954 so I spent my Easter leave pass putting it together. I had already bought the wheels from John Hutchins of Morley - Cobra alloy rims with Michelin 25 tyres and Airlite Continental hubs. His wheels were unique - he used to put a tiny shim washer on each spoke next to the flange on the hubs. I had alloy fittings - Reynolds handle bar stem, handle bars deeper than Maes possibly called Bartali (after Gino), Allez pedals, Benelux 5 speed gears x 3/32 chain, and a Regina block. This was a new idea where you bought the block and the individual sprockets of choice separately and assembled it yourself.

I can't remember how much the frame cost but in all my bike cost me over £35. 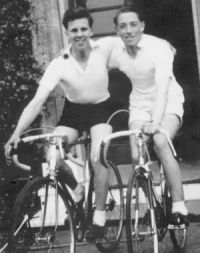 Racing was encouraged in the RAF in those days and we used to race at various aerodromes. On 26th May 1954 there were two races at RAF Driffield, a half mile straight line sprint up the main runway and later in the day along distance ‘road race’ round and round the perimeter track. I was fortunate enough to win both and I still have the trophies to prove it!

I enclose a photo of me on my Hilton Wrigley on that day, ( I'm the one on the left). The other chap was riding a Hutchins Curly Stays with 10 gears, and it cost him £55 ready-built from a cycle shop in Leeds which I think was called J.T. Rogers.

A few days ago my 42 year old son who rides a Lance Armstrong bike, asked me what bike I rode when I was doing club cycling and racing. I told him that he would never have heard of it, and that probably there weren't any still in existence anywhere in the world. He promptly looked on Google and came up with all this information/interest/pictures. I couldn't believe it! It's all so exciting to relive my youth and to know that some people still have their beautiful Hilton Wrigley bikes. I wish l still had mine!