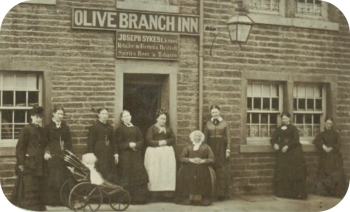 Continuing along Manchester Road towards the village we come to The Olive Branch, Retailer of Foreign and British Spirits, Beer and Tobacco. It was built and open for business by the 1841 census when it was kept by David Cooper. He was followed by his teetotal son-in-law, Joseph Sykes, who with his wife, Mary, ran "an orderly house with no gambling, swearing or drunkenness" and never opened on Sundays.

There is a 1769 date stone from the original building built into the rear of the present one. However it is not known if this building was an inn at that date.

The inn is believed to have been named after the Olive Branch Petition which was submitted in 1775 to King George 111 by moderate elements of American colonists in an attempt to avoid war with Britain. The petition was presented to the King by the Earl of Dartmouth who was the Secretary of State for the Colonies and Lord of the Manor of the Dartmouth Estate centred on Slaithwaite.

Refugees fleeing anti-Semitic oppression in Russia, Hungary, Germany and Austria arrived at Hull by boat from the Continent. So great was the need to assist their onward journey that, from 1873, up to eight special trains consisting of twelve carriages each were provided weekly to link Hull with Liverpool from where they continued by boat to America. There were many of these unfortunate people who could not afford the cost of the rail fare and had to walk the 150 miles from coast to coast, which took them through the Colne Valley. The Coopers welcomed these migrant people and provided them with cheap lodgings for the night in their stables. 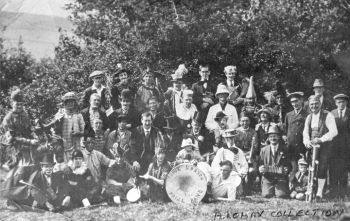 During the early 1900s the pub had its own Waffen Puffen band in which pub regulars got together with all types of musical instruments from concertinas and trombones to comb and paper, to play popular tunes of the day at local festivals. It was led by Ben Kaye who used to conduct whilst riding backwards on a donkey. The Olive Branch is still licensed and is well known as a restaurant with overnight accommodation for the discerning diner.