320 million years ago, when the area was a river delta, sediments were laid down and eventually transformed into sandstone, here called Millstone Grit. Today, a layer of peat, which started to form about 5000 years ago, covers the rock. Before the peat formed, most of the moors were covered with a dense forest of pine, birch and oak.

The area was thinly populated in prehistoric times. It seems that, as animals recolonised the area after the last Ice Age, the area became a seasonal hunting ground for early humans. There were hunting settlements on the high ground by 7000BC Stone Age tools have been found at Pule Hill, Warcock Hill, Standedge and March Hill.

The Celtic tribe in this area when the Romans arrived, was the Brigantes. They occupied a huge area north of the Humber, though the area was very sparsely populated. The Brigantes were a powerful tribe and were ruled by Queen Cartimandua.

D Sykes, in his History of the Colne Valley, paints a highly fanciful picture of wild and independent hill people, indulging in Druidism and human sacrifice.

In 1881, a stone altar was found in Longwood, which read: To the Holy God of the Brigantes and to the Divinity of the Emperor, Titus Aurelius Quintus, by the decree of the Decunions has placed (this altar) and fulfilled his vow.

William the Conqueror gave the land of the Colne Valley to Ilbert de Laci, who was the Lord of Pontefract. De Laci was a Norman, whose principal castle was at Lassi in Normandy. William gave him 204 manors in Yorkshire. The history of the succession of the Manor of Marsden is complicated and involved much subinfeudation, many times reverting to direct ownership by the king (including, for a time, John of Gaunt). A detailed history is given by D F E Sykes in 'The History of the Colne Valley'.

In the Domesday Book, the area of Marsden is described as Waste. The land was owned by Lewsin, a tenant of de Laci. At the time of Edward III, it was a forest used by the lord as a hunting area, one of the conditions on which tenants held land there being that they escorted their lord back to Pontefract after hunting. In 1232, de Laci was made the Earl of Lincoln.

The Subsidy Roll of Richard II lists no properties in what was obviously an impoverished Marsden, and only 20-30 inhabitants in the next village of Slaithwaite (Slaxthwaite).

In the Subsidy Roll of Henry VIII, two people are listed in Marsden - John Mellor and John Shaw. At this time, Holmfirth was the principal town in the area. The Hearth Tax of 1666 shows that there were over 80 dwellings in Marsden. In the same tax, Slaithwaite had 78 households, one in six of them being Sykes.

Queen Elizabeth sold the manor of Marsden to one Edward Jones, for £29. Later, the manor passed to the Greenwoods, and by the 18th Century, it was owned by the Radcliffe family. 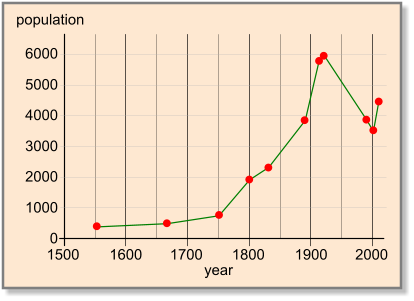