What memories those words conjure up - memories of Marsden's most beloved figure - Thomas Hirst, Parish Clerk, Postman and General Factotum. 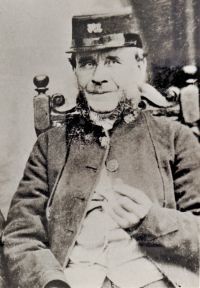 For sixty odd years he sat on his throne. beneath the sold 'three-decker', his keen eyes roaming over the gallery on the watch for any signs of unseemly behaviour on the part of Marsden's spirited youth. For sixty odd years he announced the hymns and in quavering voice, chanted the responses, and with clock-like precision played his part in the 'Vicar and Clerk duet' at scores of funerals. On one occasion only was th'owd Clerk caught napping—an occasion that still lives in the memory of many. And even for this lapse (so his friends said) old Tom was not entirely to blame, for the Vicar preached an unexpectedly short sermon and old Tom was taken by surprise! However that may be, at the close of the sermon he was heard to announce to a startled congregation, 'Hymn number two hundred and tooty-too!' While the opening peals from the organ barely drowned the giggles from the Gallery.

Ah... but who will ever forget, those thrilling occasions when old Tom, suddenly rising up from his throne, would stride down the Nave, clatter up the Gallery stairs and presently return leading by the ear some youthful victim to be stood against the Altar rail, the cynosure of all eyes for the remainder of the service? Yes, old Tom certainly had a way with him

Then, too, see him on weekdays miraculously transformed into the village postman. No General ever donned his uniform with half the pride old Tom donned his postman's hat. No Field-Marshal ever wielded his baton with half the swagger old Tom swung his stick.

'What's the time, Postman?' - a flash of the stick - a stinging pain in the nether regions and then -'It's just struck one me lad!' Yes, the old boy would have his little joke! Perhaps that's why everybody loved him so.

A man of strong convictions and unswerving loyalty was old Tom. To the end of his days he regarded the erection of the Mechanics' Hall as a personal affront - a pretentious upstart - a presumptions rival to his beloved Church School. By his postman's hat he solemnly swore that he would never set foot inside it - and he never did! Only a high sense of duty forced him to deliver letters at this despised address. Into the passage he flung them and hastened away as if the very air around were contaminated - then a pinch of snuff as a safeguard against any possible infection!

But old Tom was no 'Mrs Grundy.' He liked his tot of rum, and many an evening he would join the jovial circle in the parlour of the New Inn, where all the outstanding problems of Church and State were hotly debated. But old Tom always got the last word - which was as it should be. Did he not hold office in Church and State? On these occasions old Tom's popularity brought him many a free 'twopennuth', but, to the never-ending wonder of his companions, the end of even the most convivial evening left him quite unaffected. And now the puzzle is solved! It appears that old Tom had a secret agreement with the landlady of the New Inn that after the first two portions she was to serve him with cold tea! But, mind you, old Tom didn't allow his temperate habits to stand in the way of his just dues. He wasn't for giving the landlady brass for 'nowt. On the contrary, he kept an exact record of the drinks due to him and collected them as and when the need arose. He merely believed in spacing his drinks, wherein he showed his native wisdom.

So old Tom passed his days - worming his way ever more deeply into the affections of his friends; for behind his rugged exterior lay a heart of gold. It is said, by those who knew hint best, that the saddest day in old Tom's life was when he sat on his throne in th'owd Church for the last time. With moist eye he led the procession across the road for the consecration of the 'grand new Church'. For most folk it was a day of-rejoicing - but not for th'owd Clerk. He was like a king who has been deprived of his throne. Things would never be the same again; for this fine new Church had no 'three decker' - no throne for the Parish Clerk. What were things coming to? And, strangest of all, there was th'Vicar announcing the hymns with his very own voice! And th'Choir all dressed up in white nightshirts! In all his sixty years he had never seen 'owt like it.

Somehow old Tom didn't fit in to this new order of things. He seemed to belong to another age - an age that was dying out. He sat at the back - he sat at the side - he sat at the front, and finally he joined the ladies' choir, but for th'owd Clerk it never felt the same again. The glory of his office had departed. At last the first strange service in the strange new Church was over and old Tim slipped away to take one last lingering look at the 'three-decker' in th'owd Church across the road. Then he turn his steps to the New Inn, where there was still a tot o' rum standing to his credit. He never had greater need of it!

Old Tom, however, was made of tough stuff and he outlived th'owd Church by eight years. He was laid to rest on May 3rd, 1903, at the ripe old age of 87, sixty-two years of which had been spent in faithful and loyal service to the Church he loved. If only old Torn could have seen that 'grand new Church' filled with faces he knew so well - all come to pay their last respects to th'owd Clerk ! But, then, maybe he did see. Who can tell? Yes, and there were the Choir in their strange white garb softly chanting the 90th Psalm -the selfsame Psalm which for sixty odd years old Tom had repeated over the remains of so many friends and parishioners. So to the strains of 'Nunc Dimittus' - th'owd Clerk was laid to rest. Never again would he sing 'Hymn, number two hundred and tooty-too'. He had become part of it.